No, no, don’t panic, this isn’t another “all manner of strange things involving Marshmallow Peeps®” post, even though I can’t help thinking of the day after Easter as “Cheap Peeps Day”.

Today’s not a bad day. I got new glasses again – the replacements for the defective lenses finally showed up today. Sadly, the new right-side lens has the same kind of “fine stress-cracks” defect as the previous lenses, but at least it’s only one lens, and this time is much less severe. They’re still a big improvement on my old glasses, and I can wear them while they order a replacement lens again. 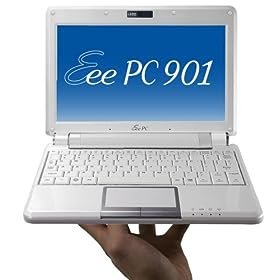 Plus, I may have located my new netbook. Commenters here (thanks defcronyke and TomJoe!) had praise for the original Linux Netbook manufacturer, Asus. I’m currently drooling at the EEE PC 901. It’s $10 more than the Sylania G Meso that I wanted but couldn’t find actually in stock anywhere (they were supposedly available a few days ago, so I’m guessing they’re just very popular, and sold out very quickly. [YOU HEAR THAT, RETAILERS?!?!?]). However, along with that extra $10 it comes with built-in bluetooth (Hooray – bluetooth tethering, chan_mobile, and the Bluetooth GPS units I have will be useful!), RAM that can be upgraded without the warranty-voiding case-cracking required to upgrade the Sylvania G Meso, and a bigger, longer-lasting battery pack. Plus, it’s actually in stock at least at Amazon.com. They even have it in the less-likely-to-warp-if-I-accidentally-leave-it-in-front-of-a-sunny-window plain white color I wanted.

I’ve still got a little bit of reluctance to switch to a “solid-state” flash-memory drive rather than an old-school mechanical one – they have less capacity, and more importantly each individual sector on a Solid-State Drive wears out and stops working after it’s written to for a certain number of times. Internally, the solid-state drives are supposed to do some behind-the-scenes tricks to spread disk writes around so that the same sectors aren’t constantly being re-written (“wear leveling”), so supposedly the modern drives should last at least around 5 years of “typical use”. Still, that means I probably wouldn’t want to run Gentoo on it – compiling involves lots of temporary file write-and-delete cycles. Oh, well – I’ve been wanting an excuse to try out Arch Linux anyway. It appears to have the same “rolling release” methodology that Gentoo does, with a decent package manager and yet the same kind of ability to custom-compile packages elsewhere to install that Slackware’s “SlackBuild” system enables, so I could still do the “compile just the features I want, optimized for the Atom processor and for minimum size” sort of trick that I could do with Gentoo.

Application of what I like to call “Intentional Computing” philosophy ought to be able to turn a machine like this into a potent portable premium performance powerhouse of…um…something beginning with “p”.

Anyway, I think the only other route I’d consider for getting a Linux netbook would be a Dell Mini 9, which is on sale right now ($50 off). However, it’d still take what appears to be one to three weeks to actually get the machine into my impatient nerd-hands from Dell, and features equivalent to the EEE PC 901 look like they’d still cost about $100 more (at least) from Dell, even with the sale going on.

Any thoughts before I commit myself*?

*– Yes, I know that can be interpreted in multiple ways. Most of them probably apply anyway, though, so I don’t care…