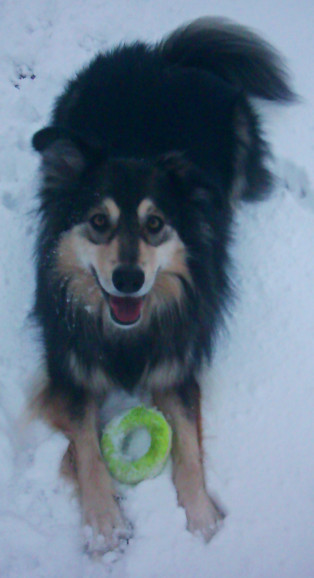 For no particular reason, here is a picture of The Dog in her natural habitat. This picture really has nothing to do with today’s blog post, but since this is supposed to be a happy time of year, I suppose a happy picture is in order.

In case anyone is wondering if I’ve forgotten the supposed microbiological emphasis on this blog, the answer is no. In fact, I’ve got a post on amateur yeast culture brewing, but I’m still researching it a bit.

Meanwhile, it seems reasonable to post about geolocation, which after all is an important and useful trick for associating information with its place in The Big Room.

Geolocation of photographs is well established, at least for JPEG images. There are standard ways of tagging a JPEG file with an ICBM address, and I’ve been having a lot of fun doing this with my own pictures. (If you’re bored, you can browse them on Panoramio, and perhaps in a few weeks may stumble on some of them in Google Earth.)

There doesn’t appear to be any standard way of tagging other forms of media files, though. What if I want to geotag an .mp3 or OGG/Vorbis audio file recorded at a particular spot? Or a “DivX/Xvid” or OGG/Theora video?

Irritatingly, it seems as though a few people have mused about it, but nobody seems to have addressed it. There are projects like The Freesound Project which does geolocate sounds, but the geographic information is not actually embedded into the sound files in any way. As far as I can tell, the location is tracked in their own server’s database only. A Google search turned up a post on the “Random Connections” Blog musing about this, but the only application mentioned is adding georss tags to the RSS for a podcast feed, not to the podcast’s audio file itself. Even the otherwise excellent Mapping Hacks book (written before O’Reilly’s current decline into yet another “Proprietary Product® How-To Guides” publisher over the last couple of years) mentions the topic in Hack #59, but disappointingly appears to have really had nothing to do with tagging files so much as “interpolating a position from a GPS track, given a timestamp”.

This all comes up because we’re about to go on a roadtrip to check out a part of the country where we seem likely to end up living next year. I’ve been told I’ve got a pretty good voice, so I was considering generating a travelogue series along the way. It appears to be relatively easy to generate a “narrated picture” as a standard mp3 file, the picture being loaded as though it were “album art”. The only aspect of the whole thing that’s missing is geolocation. For now, just being able to easily obtain the ICBM address associated with the file while playing it so that one could plug the coordinates into Google Maps to see where the recording was done, but ideally I’d like to do it in a way that could be considered standardized, so that later on people might be encouraged to add geolocalization plugins to their media-playing software.

Sure, I can just generate a .kml file with a track of where we were, with markers containing picture and audio links. In fact, I probably will, but I don’t want people to have to use Google Maps or Google Earth to make use of the geolocation information associated with the audio.

7 thoughts on “I want to geotag something besides photographs!”

Bad Behavior has blocked 188 access attempts in the last 7 days.