* – These statements have not been evaluated by the Food and Drug Administration. Beer is not intended to diagnose, treat, cure, or prevent any disease, except for maybe hypobeeremia.

No, the title isn’t really true, exactly. However, it does appear to be true that a major component of modern beer – Hops (Humulus lupulus) flowers, really does appear to inhibit “Gram-positive” (Phylum firmicutes) bacteria. 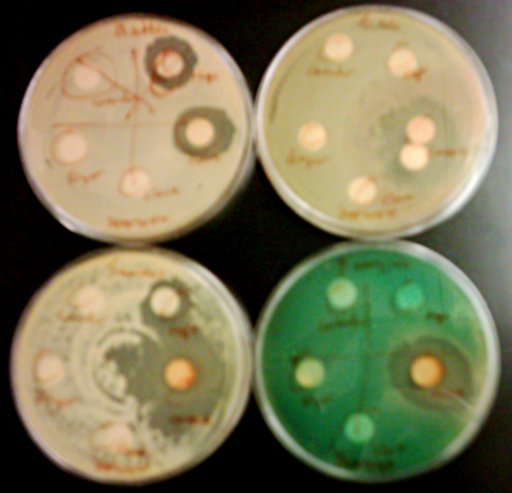 The plates in the picture, clockwise from the upper-left, are inoculated with Bacillus subtilis, Escherichia coli, Pseudomonas aeruginosa (note the green pigment), and Staphylococcus aureus. ON the plates are 5 sterilized paper disks, each soaked with an extract of (again, clockwise from upper-left) Coriander, Hops flowers [Tettnanger], Cassia oil, Clove buds, and Ground Ginger root.

Except for the Oil of Cassia (“Cinnamon oil”), I took 2.5g of each ingredient, boiled it for 15 minutes in distilled water, soaked sterile paper disks in the water, then stuck the disks on top of plates inoculated with the bacteria in question. The cassia oil is about 10?l of the pure, full-strength oil as a sort of “positive control”. At that extreme concentration, it seemed to keep everything away.
The results are even more dramatic than I expected. For one thing, I expected at least some inhibition by the clove extract. The water was the color of a moderately strong tea and smelled strongly of clove, so I would have expected to have enough for some effect…but, no, it was just too feeble. (Had I used pure eugenol, I’d have probably seen the same effect as with the “cinnamon” oil.) Compared to the rest, a mere 15 minutes of boiling a comparatively mild variety of hops flower seems to very effectively prevent growth of certain types of bacteria – which would presumably include the varieties mentioned in the title of this post.

Incidentally, if it does, I wouldn’t use it. “Gram positive” bacteria make up a substantial portion of the “normal flora” of healthy skin. Killing them off might easily leave room for other bacteria to take over and cause problems.

It does make me wonder about other possible uses of this effect, but I’ll save that for another time.

I’ll close by pointing out how useless allegedly “anti-bacterial” spices seem to be by comparison. Kind of puts the whole ridiculous notion of medieval cooks using spices to inhibit spoilage or to treat “rotten” food in its place, I’d say. It also implies that hops isn’t going to prevent “spoilage” of beer by itself, given that (for example) vinegar bacteria aren’t “gram-positive” types, nor are all the lovely ?-proteobacterial butt-bacter organisms like E.coli going to be affected…at least not by the hops. More experimentation to be performed at some later date.

This is just a simple experiment on the side of the main one I’m performing, where I attempt to isolate as many different viable organisms from a bottle of famous-brand Belgian Lambic ale as I can, hopefully for use in other foods (sourdough? Yogurt? And, of course, beer…) later.

Bad Behavior has blocked 127 access attempts in the last 7 days.