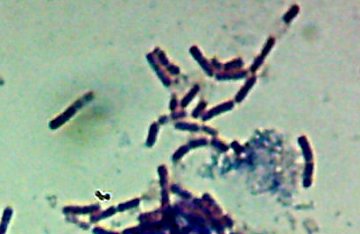 Hi! My name is Willy Bacillus!

“I came from the Portneuf river in Pocatello. I grew in 10% NaCl and I look like slime-coated sausage links. I’m purple in this picture because I’ve been Gram stained. People used to think I was just a strain of Bacillus subtilis, but I’m really Bacillus atrophaeus“.

Yes, I named my bacterial isolates. I figured if we had to give them some arbitrary designation, naming them like hurricanes was just as good as some bizarre system with names like “ZXKUQYB276” or something equally boring.

Unfortunately, we had so much trouble getting the PCR reactions to work we ended up just pooling the class’ sequences rather than having all our own. That means I only got this one. (Actually, it looked like one of my others worked, but not well enough to give enough DNA to sequence.)

I’m trying to talk the instructor into letting me do a 1-credit “Independent Study” session next semester to try to finish getting good sequence identification of Pyotr, Paul, Olga, Ursula, Peggy, Penny, Ada, Horace, and Castor.

The first seven of those all produced fluorescent stuff (probably siderophores, I’m guessing) and while I suspect they’re probably all Pseudomonas species, and almost certainly all gamma-proteobacteria, I was told they actually could be quite different, and I’d really like to find out just how different they really are. Plus, Horace the Thermophile was just kind of neat-looking in the microscope.

One thought on “Remember “Where Was I, Episode 3?””