There’s this thing that some people do sometimes when they’ve been getting stressed out in one place for a while. I hadn’t done it in so long I can’t remember what it’s called. You know, where you Leave the area and then avoid it for a while. Oh, yes, that was it, a vacate-shun. Anyway, leaving the barren desert wastelands of the West, we headed east, and spent a few days admiring the area around the midpoint of the Appalachian Trail: Harpers Ferry, West Virginia. (Incidentally, I can recommend the “Angler’s Inn” Bed and Breakfast there, and the whole time there was incredibly delightful to me. I think I’d love to move to the area.).

I was delighted to note that there was an Old Book store in downtown Harpers Ferry. One thing about the Eastern US is that it’s been settled by book-using folks for somewhat longer than the West, so it would seem it’s easier to find really good Old Books. I found a publication of a 110-year-old microbiology book. In decent condition, for just over $20, no less! Not counting the (relatively modern) reprint of Micrographia that I picked up from a library sale, this makes it by far the oldest microbiology book I own now.

The book in question, published in 1897, is “Story of Germ Life”, by Herbert William Conn. Not to be confused with Harold Joel Conn of “Conn’s Biological Stains” fame…who happens to be Herbert William Conn’s son. To be fair, the book *I* got was actually a republication from 1904, so only 103 years old…back when copyright was more rational (7 years, plus an OPTIONAL 7 more years. Thus explaining why my republication came out 7 years after the original.) It appears to have been part of a series called “Library of Valuable Knowledge”. The bookstore actually had another one of them, but I don’t remember what its topic was.

“Story of Germ Life” isn’t really a textbook so much as an overview of the subject of “Bacteriology” (as understood in 1897) for otherwise well-educated people – the kind of book I don’t think there are enough of these days. The Gutenbook project actually has a plain-text-only version of the book online here. Of course, then you miss out on the incredibly useful illustrations: 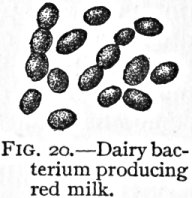 I always find it interesting to go back and see the earlier stages of scientific endeavors – especially as relates to my own interests. There always seem to be things that have since been forgotten, abandoned, or glossed over in them. 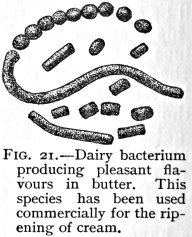 H.W. Conn seems to have been most interested in dairy microbiology, so there is a substantial amount of space devoted to it. I’ve heard of “blue milk” before (Yummy!….Pseudomonas?), but not Red or Yellow milk. He also devotes space to discussing the affect of “good” (and “bad”) bacterial cultures on butter, cream, and cheeses. I’m not even sure if butter is cultured these days, or if they just churn it up fresh and cold with minimal growth. Dangit, one of these days we’re just going to have to move somewhere we can keep a miniature dairy cow so I can do some experimentation with real unpasteurized fresh milk. 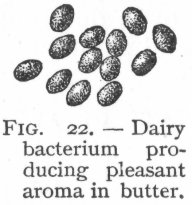 Bacterial phylogeny was so quaint back then. “Bacillus acidi lacti.” Ha! I love it. Interestingly, the term “Schizomycete” doesn’t appear anywhere in the text, though that may or may not be because it was considered unnecessarily technical for the intended audience. There’s actually very little about microbiological methods, too, which is the one major disappointment for me. Oh well, still interesting stuff. Conn actually mentions various “industrial” uses of bacteria including retting (soaking fibrous plants like flax or hemp so that bacteria eat the softer plant material to free the fibers), the roles of different bacterial cultures in curing tobacco, and even a fermentation in the production of opium (which Conn says is fungal rather than bacterial).

Also, much to my approval, the first 2/3 of the book is not about diseases. Only the last third of the book discusses “parasitic bacteria” and related topics. I leave you with this quote from the book’s 1897 Preface, which I think is still relevant today:

“Few people who read could be found to-day who have not some little idea of these organisms and their relation to disease. It is, however, unfortunately a fact that it is only their relation to disease which has been impressed upon the public. The very word bacteria, or microbe, conveys to most people an idea of evil. The last few years have above all things emphasized the importance of these organisms in many relations entirely independent of disease, but this side of the subject has not yet attracted very general attention, nor does it yet appeal to the reader with any special force. It is the purpose of the following pages to give a brief outline of our knowledge of bacteria and their importance in the world, including not only their well-known agency in causing disease, but their even greater importance as agents in other natural phenomena. It is hoped that the result may be to show that these organisms are to be regarded not primarily in the light of enemies, but as friends, and thus to correct some of the very general but erroneous idea concerning their relation to our life.” — April 1, 1897

4 thoughts on “The Oldest Microbiology Book (that I own)”

Bad Behavior has blocked 95 access attempts in the last 7 days.