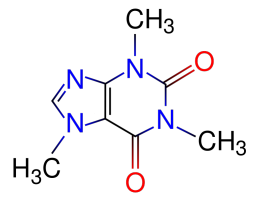 Our new Asylum has real internet finally now and we’re getting settled in. The Houston area here is one of the most hot and humid areas of the US. All hot and sweaty. So of course I’ve been advised that my favorite psychotropic substance – 1,3,7-trimethylxanthine [“caffeine” for party-poopers who aren’t into the fancier names] – is no longer my friend, because it’s a diuretic that’ll dehydrate me, right?

NO! Shenanigans! Caffeine is our FRIEND! And that stuff about it being a diuretic? CRAP! LIES AND SLANDER!

But don’t just take my word for it. After all, humans are a bunch of freakish multicellular soft-celled eukaryotes, and I normally focus on normal organisms like bacteria, archaea, and yeasts. So, let’s ask some real human-physiology type scientists and check out their official peer-reviewed findings:

“[…]This review, contrary to popular beliefs, proposes that caffeine consumption does not result in the following: (a) water-electrolyte imbalances or hyperthermia and (b) reduced exercise-heat tolerance.”

(“NF” = “No Fluid replacement” – the “dehydration” mentioned here is due to exercising in the heat, and doesn’t appear to be related to whether the test subjects consumed caffeine or not)

“[…]Several markers of hydration status were also taken immediately pre and post each condition, including measures of urine specific gravity, urine electrolyte balance (K+, Na+), and urine colour. None of these measures indicated a difference in hydration status as a result of the dietary intervention in either the control or tea condition.[…]”

(In this study, the tea was the only caffeine-containing substance involved. The study group’s caffeine came solely from the tea. The control group got no caffeine at all.)

“[…]It[caffeine] is relatively safe and has no known negative performance effects, nor does it cause significant dehydration or electrolyte imbalance during exercise.[…]”

“[…]This preliminary study found no significant differences in the effect of various combinations of beverages on hydration status of healthy adult males.[…]”

See? Oh, I know what you’re going to say next – “But, like, dude! When I drink my Venti Mocha Crappucino [note: Link goes to “Foamy the Squirrel”, who is a bit of a pottymouth, ranting about the “Tall/Grande/Venti” nonsense.  It amused me.] or a can of Jolt Ultra I have to take a major whiz a little while later! Isn’t that ‘cuz of the caffeine?” Well, no, it isn’t. It’s because you just drank a bunch of liquid. Duh.

So, you see, caffeine really is our friend. Be nice to caffeine. But don’t feed it to your yeast in the presence of benzoic acid because it’ll kill them. See? I managed to turn this into a segue back to the stuff I was talking about before the whole “buy a house in Texas” thing started interfering. Stay tuned…

Bad Behavior has blocked 355 access attempts in the last 7 days.