Just a brief pre-post before the main one I’ve got brewing now (which will be posted either later today or tomorrow). 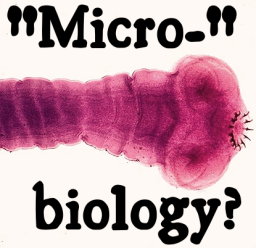 Microbiology is the dominating topic of this particular blog, but I don’t think I’ve ever addressed what I consider to really count as “micro”biology. This isn’t necessarily an obvious topic. My old “Microbiology” book from 8 years ago, plus the textbook from last year’s “Pathogenic Microbiology” class both contained large sections discussing organisms that are visible without a microscope. Heck, the “Pathogenic Microbiology” text even had a whole section on spider and insect bites. And, tapeworms? Since when is “over 30 feet long” considered “micro”? As I like to say: It’s time for Microbiology to grow up and move out of Medicine’s basement.

So: Here are the defining features of what I consider to be a “microbe”, at least for purposes of what I tend to discuss here on the blog:

It’s that last point that prompted me to write this post, mainly because it’s such an important part of why microbes work and how they affect their surroundings, especially when it comes to food microbes. What I mean by “do not eat” is that they are incapable of taking large (microbially speaking) chunks of material into themselves to use. Any cell nutrient for a microbe must be in the form of small molecules, like sugars, small peptides or individual amino acids, and so on that can be easily transported across the cell membranes and through the cell wall where applicable.

The importance of this is that for a microbe to grow on a complicated substance like meat or bread (for example), they have to excrete specialized enzymes that break down the substances out in the environment into simpler components like sugars or small peptides. If a microbe cannot secrete a protein-digesting “protease” enzyme, it can be surrounded by tasty, nutritious proteins and still starve to death. If a microbe can’t secrete an amylase (starch-digesting) enzyme, it doesn’t matter that starch is made of nice yummy glucose molecules because they’re all wadded up into long chains of starch that the microbe can’t get at.

And that, finally, is important because it brings up issues of growing multiple microbes together to accomplish something. Sake, for example, is made by fermenting rice, but rice is made primarily of starch. Saccharomyces yeasts don’t make amylases, so in order to make sake, you also have to add a kind of mold (Aspergillus oryzae, one of the types of white-mold-with-little-black-specks that you may see growing on the bread you’ve left sitting around for too long). A. oryzae is also a microbe and therefore can’t “eat”, but it does produce amylase. Since the amylase is breaking down the starches outside of the cells, this means the released glucose is also available for the yeast to use.

Admittedly, my definition above isn’t perfect. On the one hand, it leaves out protozoa (like amoebae and the well-known Paramecium, both of which actually do take in “chunks” of food, but both of which most people would normally consider to be “microbes”. It also leaves IN things like mushrooms, which are not usually thought of as being “microbes” by people who aren’t microbiologists. And, of course, it leaves me with no excuse not to go and learn something about eukaryotic (“plant”) algae (as opposed to bacteria-algae, a.k.a. cyanobacteria) and diatoms. Suggestions for updating my definition may be left in the comments…

Just something that came up while I was assembling what will be the next post. Stay tuned.