Which I think I shall designate as Ulysses (the Ubiquitous). This sample came from what appeared to be an individual colony on an agar plate made with ~8% salinity diluted Great Salt Lake water. I tried to ‘pick’ a colony with the tip of a hypodermic and ‘poke’ it into the anaerobic tubes. Guess it may have worked, at least with a few cells. (This was done 6 months ago, so if I even got only a few cells over, it’s had plenty of time to grow…) The picture’s a little overexposed (and I tweaked the contrast) though… 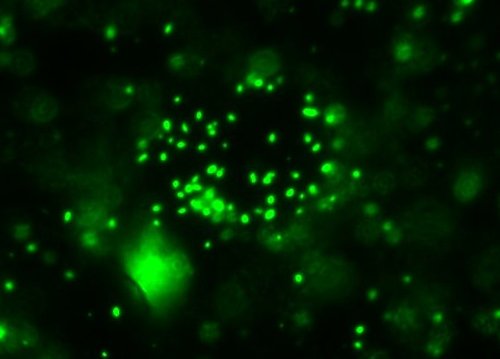 I really have no way of knowing for sure, but there does appear to be the same “mass of short rod-shaped bacteria attached to the iron oxide particles” in all of the samples I’ve “live/dead” stained and examined in the microscope so far. So far this is true in every salinity I’ve checked, from about what I estimate to be about 8% salinity (a little over twice as salty as regular ocean water) all the way up to about 27% (pretty much as much salt as you can PUT in water at room temperature and normal pressure). Through the entire range, I see what appears to be the same size-and-shape organism attached to the particles. That would actually be quite interesting. The highest salinity I’ve run into in the “literature” for an organism to be actively growing is about 20%, assuming I did the conversion from “g/L” correctly.
Speaking of which, it turns out the water in the Great Salt Lake is essentially the same as seawater, just saltier (that is, the minor salts in seawater besides “sodium chloride” are also nearly identical in proportion in the lake. There’s just more of it.). Assuming I did THOSE calculations correctly, the amount of sulfate in the water works out to about 0.22M. That’s roughly 8 times as much as in normal seawater – again, assuming my hasty formula-fondling didn’t have a lot of errors.

In any case, there’s a metric [pants]load of sulfate in the water. That means there’s PLENTY of it there for the microbes to breathe and turn into sulfide. No need for any of them to breathe the iron then.

I haven’t given up on that totally though – apparently molybdates can inhibit sulfate respiration, or so I’m told, so I can try making up a solution with some sodium molybdate added. Alternatively, now that I know the Great Salt Lake is very nearly just “concentrated seawater”, I can always make up some “artificial” sea salt, but substitute something else for most of the sulfate and see if things still grow on the iron oxides. That’s likely my next step as a last try to see if any of my Babies can actually breathe the iron. (This is in addition to trying to purify some DNA from Ulysses there, since I think that one is a pure culture.