You may have heard of Joseph Lister before. He’s the surgeon who really got the use of antiseptics for surgery going, saving quite a few people since then from nasty deaths due to wound infections. He also appears to have been a competent microbiologist. Today’s paper is one he presented to the Pathological Society of London in 1878:

Lister, J: “On the lactic fermentation and its bearings on pathology.” Transactions of the Pathological Society of London; 1878; 29:pp425-467

The American Society for Microbiology has a republication of this article available online in PDF format. It’s well worth reading, so please check it out. Meanwhile, here’s a summary:

Although today we consider it essentially obvious that fermentation processes are caused by microbes, this wasn’t obvious at all to people in 1878. Certainly, people like Pasteur had demonstrated that microbes always seemed to be associated with fermentations, but many people were apparently still not convinced that the microbes were actually the cause of them. 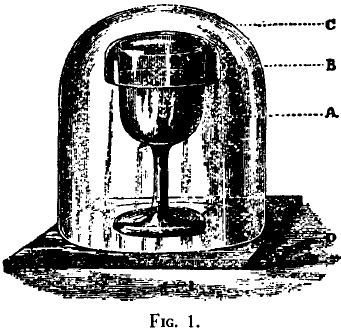 Lister set out to do no less than demonstrate that a single bacterial cell of the appropriate type could be introduced into sterilized milk and cause lactic-acid fermentation, while sterilized milk receiving fluid but not bacteria from a sample of already-soured milk would remain unchanged.

While I’m pretty sure these days we have ridiculously expensive devices for manipulating single bacterial cells using high-precision manipulation of microscopic-scale glass suction tubes or perhaps lasers along with a powerful phase-contrast microscope, Lister had to use a more basic (and, in my opinion, much more elegant) method to get his “one single bacterium”.

After coming up with his arrangement of glass containers and covers (all carefully heat-sterilized) and a means of putting liquid into his containers in a contamination-resistant manner, Lister filled some glasses with sterile boiled milk. He then got some soured milk from a local dairy and inoculated one of the sterile milk glasses by dipping a heat-sterilized needle into the sour milk, then the sterile milk. Once he could tell from the smell of sour milk that his formerly-sterile milk was fermenting, the fun began.

For one thing, they apparently had micropipettes in the 19th century, which was almost as much of a surprise to me as finding out that they had fax machines in the 1930’s. Anyway, Lister determined that 1/50th of a minim [1/50 minim = 0.0003 tsp = 1.24?liters] was exactly the right amount of liquid to fill the area under his microscope slide’s cover slip without overflowing. He then used the micropipette to transfer that amount of his soured milk to a microscope slide, where he could count the bacteria. Fortunately, he didn’t have to literally count them all – he counted several sections of the slide and then averaged his counts to estimate how many bacteria were in the entire 1/50th minim of sour milk. He also noted that although most of the bacteria he saw where of the type he was calling “Bacterium lactis” (which nowadays we would almost certainly find to be some member of the genus “Lactobacillus“), there was also a smaller number of another type of obviously-different bacterium in there.

Apparently his estimate came out to about two million “Bacterium lactis” cells per 1/50th minim, since he finds that in order to get down to an average of one single cell per 1/100th minim (which I’m guessing was as small as he could actually transfer – that’s less than � of a ?liter!) he had to dilute his milk sample by a factor of a million. He then used his trusty micropipette to transfer this amount of his soured milk to each of five glasses of sterile milk.

His estimate of one cell per sample may have been a little high, as only one of the glasses fermented, but that’s okay – it meant that it was very likely that the population of bacteria in the fermenting glass came from just one single cell. In other words, a pure culture. Microscopic examination showed none of the non-“Bacterium lactis” cells. Glutton for punishment that he was, Lister then repeated the process with this newly-soured milk, counting cells and transferring tiny amounts to sixteen more glasses of sterile milk. This time he varies how many estimated cells go into each glass – anywhere from one to 4. He finds after a time that those which go sour all have his “Bacterium lactis” growing in it – and the ones which were estimated to have gotten more cells to start with soured more quickly. None of the glasses that remined un-soured showed any bacterial growth. “Bacterium lactis“, and not some “soluble” substance in the liquid that just happened to be associated with the bacteria, appear to cause milk souring. Q.E.D..

If this sounds familiar, it may be because this examination of a “disease” of milk (souring) could be considered the prototype of “Koch’s Postulates“, which you may remember describe how you prove that a particular microbe is the cause of a particular disease (of people or other animals…). It’s worth noting that Lister’s simple and effective dilution technique is still sometimes used in various forms for isolating pure cultures of microbes.

Oh, and the mouthwash? The year after this paper was published, Listerine� hit the market – yes, it really was named after Dr. Joseph Lister, even though as far as I know he didn’t have any affiliation with the company that made it. Originally it was a much stronger solution used as a surgical antiseptic. It didn’t actually become a mouthwash until decades later, when the company invented “halitosis” as a marketing tool for it.

7 thoughts on ““On the lactic fermentation and its bearings on pathology.””