Let us read from the Book of “Art Across Time”, chapter one, page 36:

“This particular painting seems to represent either a ritual or a supernatural event. In contrast to the animals, which are nearly always in profile, this creature turns and stares out of the rock. His pricked-up ears and alert expression suggest that he is aware of an alien presence.”

Wow, that must be one exceptionally detailed and well-preserved cave-painting, to convey all of that. Let’s have a look: 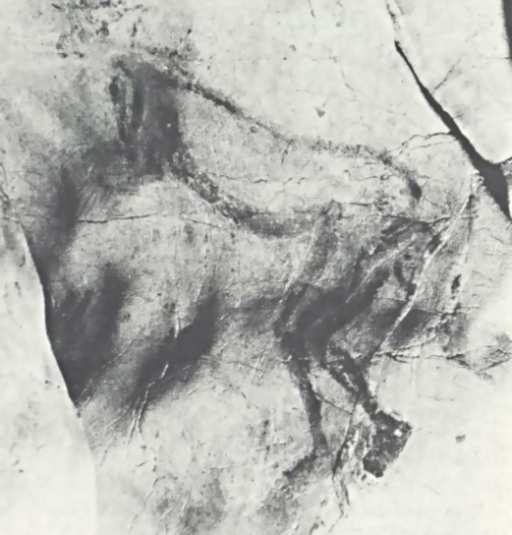 Okay…to me the “head” looks like an indistinct smear, with spots that a human mind – tuned to recognize patterns, especially faces, even if the patterns don’t actually exist – might interpret as some kind of face. To me, it looks kind of like a crudely-drawn cartoon-animal face, with overwhelmed-Charlie-Brown-style bugeyes, a button nose, and the tongue hanging out of one side of its mouth. Yet, somehow, I don’t feel inclined to suggest that this is what is actually there. Personally, I’d be more inclined to suspect that the artist (estimated to have lived 13000-15000 years ago) had trouble finishing the drawing and gave up. Yet if you poke around for information about this image, you find all kinds of breathless prose about it. So, where does all the poetic language about the possible “meaning” and interpretation of the Trois-Frčres “Sorcerer” come from?

I suspect it all comes not from the seemingly rare photographs of the original cave-painting, but from the famous and heavily-embellished sketch made by Henri Breuil:

Yeah, that’s not what I see in the photograph of the original, either.

Apparently, this cave-painting is about 13 feet off of the floor. Monsieur Breuil described having to stand with one foot on a small projecting rock, then half-turn and sit up against the cave wall while trying to juggle his light and drawing implements to make hist sketch.  Sounds to me like the cave-painting is in a hard-to-reach spot, perhaps supporting my “artist had trouble drawing there” hypothesis? I also can’t tell from the original if all of the figure was painted at the same time, or if perhaps someone started out drawing a deer or something of the sort (the hind legs look about right for that proportionally, prior to the ‘human-lower-leg’ part), and hundreds of years later some wiseguy came along and drew human-type lower legs and feet on the end of the deer’s legs as a joke, for that matter.

The Art History class is interesting, but the amount of speculative-sounding interpretation of the art and architecture without supporting citations is something of a culture-shock to me after the last couple of years for more “hard-science” classes.

Anybody see anything there in that original painting that I’m missing? Or for that matter, know where to find a GOOD photograph of it?

2 thoughts on “Art historians – do they minor in Purple Prose?”

Bad Behavior has blocked 123 access attempts in the last 7 days.