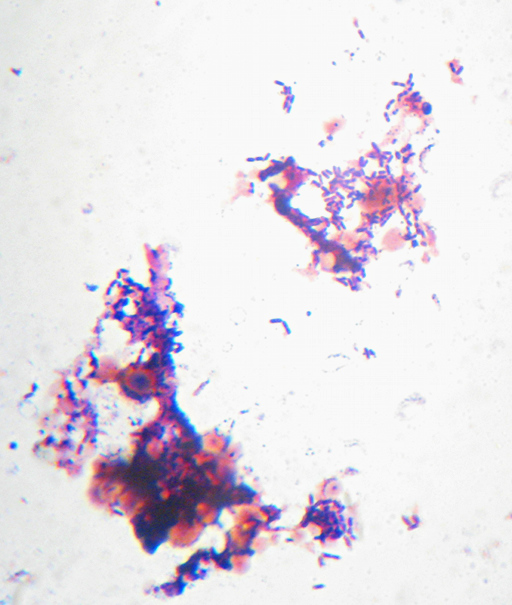 My first “Will It Ferment” project is now in process.

See, I’m stuck with a somewhat unpredictable schedule and a need to travel frequently, cramped spaces to work in at the moment, and a streak of gustatory perversion that I just can’t help an urge to rebel against purists at the moment.

Quick bit of background on that latter statement: I’ve noticed that people seem to think there are only two-and-a-half kinds of “real” non-commercial fermented beverages. There’s beer (which is apparently defined as a strong tisane of hops, flavored by mixing it into fermented malt), there’s wine (which is always made of grapes of course), and out on the fringes of respectability is Mead (“Honey wine”) which seems to be slowly gaining some acceptance as a mildly exotic brew. The attitude is that anything else you might want to brew (say, a beer flavored and preserved with something besides hops, or a wine made out of anything but grapes) is probably some quaint “country” (i.e. hillbilly) thing for people who either live too far from civilization or are too poor to just buy a “real” beverage, or are too ignorant to know the difference. Either that, or it’s just some desperate attempt to make something to get drunk on. Might as well be making pruno.

The attitude kind of annoys me, so I’m trying to make a sort of “free person’s pruno”. I figure if the end result is as palatable as it could be, it’ll probably resemble “Zima®”.  Uh, no, I don’t expect it to be great – this is merely an experiment.  My must has an Original Specific Gravity (“O.G.”) of approximately 1.054, about the same as most lagers start out. As I write this, my gallon of must is on the stove in a stainless steel pot. I’m going to try to heat it to boiling and let it boil for a few minutes in hopes of driving off much of the benzoic acid in it, so as not to inhibit the yeast fermentation. 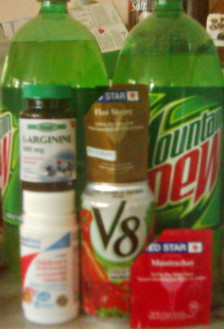 To your right, you should see the ingredients used in this project. Yes, those two bottles in the background are there on purpose. I’m trying to make…Mountain Dew® Wine.

If I’m UNlucky, either it won’t ferment at all (and I can then use it to try to develop a Mountain Dew Tolerant strain of yeast), or it’ll ferment but taste utterly disgusting (in which case I can use it to try to obtain some Gluconobacter strains and make Mountain Dew Vinegar), or it’ll be “infected” and will already BE Mountain Dew Vinegar, which would also be pretty funny anyway. So, other than completely unforseen results, this experiment can’t be a TOTAL waste.

[Update 20080727: Preliminary results of this perverse project may be read In this more recent post…]